A little boy needs surgery, sign an email petition and forward it around the world, urgent cell phone directories becoming public, outraged political news or urgent warnings about someone stealing your kidneys. We, in concern, pass these on to our friends and family perpetuating the tale from fiction to fact.  Sometimes these tales are just misinformation, rumors, fallacies and strange news. 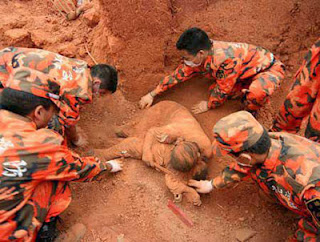 So how do we know if it is true or a hoax? Most urban legends are too general, don't give enough information for verification or just don't have the capability to be true.

For example, the picture (right) was shared via facebook and email (source)

The story goes on to insist it is absolutely true.


This is a true story of Mother’s Sacrifice during the Japan Earthquake.

After the Earthquake had subsided, when the rescuers reached the ruins of a young woman’s house, they saw her dead body through the cracks. But her pose was somehow strange that she knelt on her knees like a person was worshiping; her body was leaning forward, and her two hands were supporting by an object. The collapsed house had crashed her back and her head.

With so many difficulties, the leader of the rescuer team put his hand through a narrow gap on the wall to reach the woman’s body. He was hoping that this woman could be still alive. However, the cold and stiff body told him that she had passed away for sure.

He and the rest of the team left this house and were going to search the next collapsed building. For some reasons, the team leader was driven by a compelling force to go back to the ruin house of the dead woman. Again, he knelt down and used his had through the narrow cracks to search the little space under the dead body. Suddenly, he screamed with excitement,” A child! There is a child! “

The whole team worked together; carefully they removed the piles of ruined objects around the dead woman. There was a 3 months old little boy wrapped in a flowery blanket under his mother’s dead body. Obviously, the woman had made an ultimate sacrifice for saving her son. When her house was falling, she used her body to make a cover to protect her son. The little boy was still sleeping peacefully when the team leader picked him up. 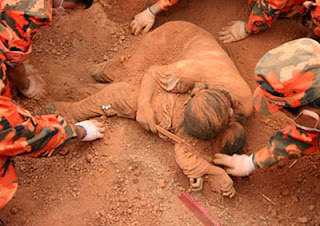 Now, some facts.
Other hoaxes might include email and online petitions (that are not usually legally valid due to lack of verification), lost children that don't have a link to National Center for Missing & Exploited Children or other legitimate source and more.

If you cannot verify the information, it is often worth a check on many of the urban legend research sites. Although not perfect, they do the groundwork for you by doing research to check, verify and legitimize.

Coming tomorrow: Nigerian emails about sad billionaire widows needing your help will never make you rich but will steal you blind faster than you can say, "SCAM". The world is full of tricksters, charlatans and deceivers.