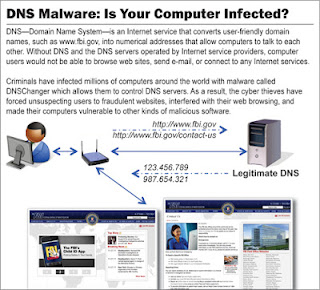 Never heard of it? Heard of it but not sure what is happening?  Let me explain a little bit about it.

This malware infected both Windows and Mac computers. Millions of computers were infected with this malware (short for malicious software program). Although many computers have been "cleaned" with updates and antivirus and malware removal programs,  the FBI still estimates that 500,000 computers are still infected.

The rogue program infected the computer by changing the DNS.  The DNS is like the number directory (173.194.78.121) that points to the correct web address (www.dailymouseclicks.com). This malware misdirected people from legitimate websites to spoof websites that looked very similar that contained lots of advertising. From my understanding, there were a few variations of the malware which restricted operating system and antivirus updates that would remove the virus/malware.

You can check to see if your computer is infected by going to http://www.dns-ok.us/.

If the background is green, your computer is OK. If it is red, you will need to get your computer serviced by a professional.  The reason I recommend taking it to a professional is for the last 6+ months your computer has been infected. There is a good chance that it has been compromised by other viruses and trojans.  The repair may require manual removal of viruses or worst case, backing up documents and reinstalling your operating system. ☺