2012 Olympics: Taking it to the Internet

When I was a child, the Olympics were in some distant place, to only be dreamed about or watch on TV in pre-recorded shows such as Wide World of Sports. 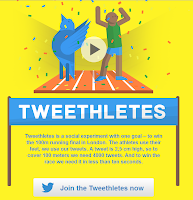 Now we can watch the 2012 Olympics, follow every aspect online, watch clips, chat with others and even participate in some unique events such as the Tweethletes. Ok, this is just fun but if you are into Tweeting, have you ever considered how far your tweets would take you?

This year, they are dubbing the 2012 London Olympics as the "Social Media Olympics".  The IOC has opened a hub online where you can join in discussions, tweets, live photo feeds, rewards and more.  What an incredible event and you can now be a part of the action from your desk, tablet or mobile phone.

A word to the wise, as always, there are tons of scams out there during the Olympics. Use caution and a good antivirus when browsing websites, shopping or even looking for online streaming. Stick to known sources.

TV Scheduling and online streaming IF you have a TV provider that includes MSNBC and CNBC - http://www.nbcolympics.com

I have heard that that BBC will be streaming online - http://www.bbc.co.uk/sport/0/olympics/2012/