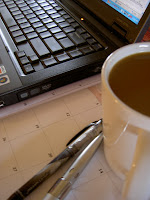 Ok, my dear husband's two year old laptop no longer has any battery power (about 5 minutes or so before it dies) so we stopped by the local battery specialist and learned some important things about Lithium-ion and Lithium-polymer batteries.

A laptop battery's lifespan is approximately 1,000 charge cycles, or 2-4 years under normal operating conditions.  The battery in question had around 75 cycles and was determined to be dead.

My husband's laptop normally stayed plugged in.. after all, you would think that plugging it in would bypass the battery.. wrong. Instead it was damaging, by overcharging the battery.

It was recommended that you discharge the battery until you get the warning on the laptop or even better, discharge completely, then plug it in.. charge to full and then disconnect the power.   Run the battery down and recharge it at least once every month, even better, every couple of weeks but optimally.. every day.

Matter of fact, he stated that with a new battery, do this discharge cycle a dozen times or more to "synchronize" the cells. It increases the longevity of the battery.

Some things that will degrade your battery:
Who knew?  The person that will be selling us a replacement battery to the tune of about ♪♫ $90 ♫♪. So who is the smart one?  Well, we are now...
No comments:

Google Chrome has a cool plugin that allows you to create 2 side by side “panels”. Sometimes when browsing for something (such as textbooks), it would be easier to have a second screen without having to have pop over to another tab or another browser screen.

Or if you are using one screen for research and the second screen with Google Docs so you can write your report or document.

So, if you use Google Chrome for your browser, a very fast browser, this little script (Javascript to be exact) may be just what you need. Would you prefer the Firefox extension Split Browser?  Want to do this with two screens on your computer? 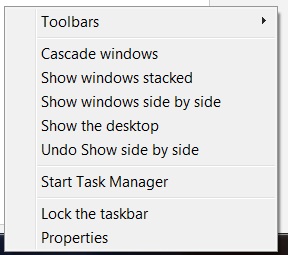 You can use your windows system to keep two applications side by side or stacked.  This option can be used by right clicking on task bar and selecting your choice.

Want to arrange two (or more) windows side by side in Windows XP or Vista? Hold down Ctrl and click on the desired windows in the taskbar; then right-click the taskbar and select Tile Vertically. In Windows 7, you can simply drag any open window to the right or left edge of your screen and then let go.
No comments:

Having a hard time explaining what you see on your computer? This quick tip can come in handy for your favorite (or not so favorite) tech support person.

Take a screenshot by using the Print Screen key and the Shift key, above the backspace (Shift-Prt Scr), which copies an image of your full computer screen to your clipboard so that you can paste it (using the Paste on the upper left or Ctrl-V) into your Paint program or your preferred image editor. The Paint program can be found under Start/Accessories. Save it as a gif or jpg file and send it as an attachment to your tech support. You can also insert it into a word document by taking the screen shot and then after clicking the mouse where you want the image, paste the image with Ctrl-V.  To capture just the active window (the one on top, last clicked on), use Ctrl-Alt-Prt Scr.

So.. it is time to implement those New Year resolutions... There are so many great tools online to help you get started..
So, start the year off right... plan your resolution and take the first steps to be successful in 2012.  It is always nice to start off strong.. but remember to pace your self and never quit.. even when you stumble.  This truly will help you keep your resolution until 2013.
No comments: 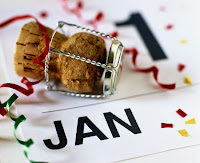 As a transplant to the south, I always find traditions interesting.. So, did you know that eating black-eyed peas dates back to the civil war?  Read this article about this tradition of good luck at